Female cat pregnancy is characterised by increased weight from the beginning: the female needs to accumulate large amounts of fats during pregnancy to ensure the properte growth of her kittens.

Contrary to what happens with female dogs, the pregnancy of cats is characterised by increased weight from the beginning. During the first two-thirds of the gestation, cats will accumulate fat reserves for use during late pregnancy and during lactation to feed the kittens. From the sixth week, the weight gained by cats will essentially end up in the growth of the kittens.

This is why cats should receive a large amount of fat in their diet to accumulate energy and improve the survival rate of the kittens at birth. Normally, during pregnancy food intake increases in cats regularly at around 10% per week, up to eating in the region of 70% more in relation to their normal diet.

After delivery, cats still weigh around 20% more than what they weighed before pregnancy. This excess weight is used to cover energy needs during lactation. You should leave at the mother's disposal foods that are rich in fats and plenty of clean, fresh water. Food for growing kittens is a good choice to feed a pregnant cat because of its caloric and calcium content, among others.

Weaning occurs between the sixth and seventh week after labour. Until then, cats will not return to the weight they had before pregnancy. If we perceive excessive thinning, we can continue supplying nutrients that are rich in fat until they return to their normal weight.

In such delicate times as pregnancy, labour or breastfeeding, it is essential to give cats all the nutrients their body asks for, in order for mother and kittens to be in perfect condition. 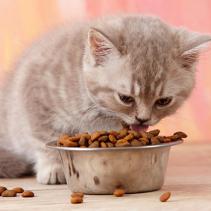 Cats have always been considered very demanding animals with regard to food. Cats won't just eat anything, they say,...