My cat is left handed

Almost 90% of people preferentially use their right hand to perform complicated tasks. However, having a dominant hand is not the person’s prerogative: in other animals a clear preference to use one of the front paws has also been detected. Cats are one of these animals. How do you know if a cat is right or left handed?

Almost 90% of people preferentially use their right hand to perform tasks such as writing or holding a fork or comb. However, having a dominant hand is not only typical of people: in other animals a clear preference to use one of the front paws has been detected. Cats are one of these animals.

To study the dominance of one paw in cats, experts have conducted two types of tests. In the first test, cats face the challenge of catching a toy suspended above their head or receding in a straight line on the floor. In the second test, cats face a more complex challenge that requires more skill in handling: they have to retrieve a piece of food from a container that is so narrow it prevents them from grasping it with the mouth and forces them to use paws.

In both tests the first paw used by the cat is recorded. Having a dominant paw does not mean that it exclusively uses that paw; it means that it is more likely to use it rather than the other one.

When attempting to catch the moving toy, cats do not usually show preference for one particular paw, but the more complicated task of retrieving food from the container shows a clear asymmetry in the use of the front paws. Approximately the same percentage of cats are right handed (46–50% of cats, depending on the study) or left handed (44–47.6%). Few cats are ambidextrous (2.4–10%). Furthermore, female cats show a tendency to being more right handed and males tend more left handed.

The advantages of this preference for cats and the reason why there is a difference linked to the gender is unknown, but what we do know – and it has also been found in other species – is that the choice to use a paw depends on the complexity of the task.

We invite you to try this same experiment with your cat to see if it is one of yours, if it uses the other side, or if it is one of the few who can use both paws with equal skill. 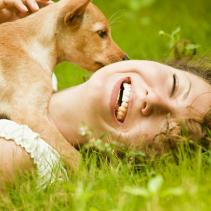